Japan Airlines (JAL), together with its Pacific Joint Business partner American Airlines, announced that the carrier will expand its trans-Pacific network with service between Narita International Airport (NRT) in Tokyo and Seattle-Tacoma International Airport (SEA), starting March 31, 2019*. This will be JAL’s sixth West Coast route operating between Japan and North America.

The top 20 U.S. cities with the highest travel demand from Japan account for 84 percent of the market and Seattle is the fifth largest destination after Los Angeles, New York, San Francisco, and Las Vegas. By launching this route, Japan Airlines will respond to the travel demand in Seattle, where business and leisure travelers will have new options to fly to Japan and to connecting cities in Asia. JAL has established an optimal departure and arrival time to and from NRT, allowing customers to seamlessly connect throughout the carrier’s international network.

«We are pleased to announce the introduction of the Seattle-Narita route, which will go into service in March 2019. Along with our joint business partner, American Airlines, we look forward to welcoming more visitors to Asia for business or pleasure who will experience Japanese hospitality from the moment they step onboard the aircraft,» said Tadashi Fujita, Executive Vice President of Japan Airlines.

“This new route will strengthen American and JAL’s joint business across the Pacific and meet the growing demand in the Seattle-Tokyo market,” said American Airlines President Robert Isom. “Our customers in Seattle will soon have nonstop service to one of the world’s most important business and leisure destinations, as well as convenient connections to many other cities in Asia.”

In addition, with the announcement that JAL and Alaska Airlines will introduce 20 new codeshare flights through Seattle, customers will now have a total of 56 U.S. destinations to choose on flights operated by Alaska Airlines.

*The following flight schedule is subject to government approval. 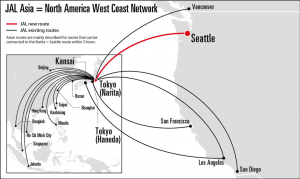