The LATAM group projects an 85% passenger operation for December (measured in available seat kilometers – ASK) compared to the same period of 2019, confirming its estimate for the end of the year and approaching pre-pandemic operations levels. Thus, the group expects to operate approximately 1,370 domestic and international daily flights during the month, connecting 144 destinations in 22 countries. The cargo business, in turn, has more than 1,540 flights scheduled.

Among the novelties of the period is the reactivation of the seasonal route Santiago – Florianopolis and the start of the sale of emblematic routes that return in mid-2023, such as São Paulo (GRU)-Johannesburg, Brasília-Lima and Porto Alegre-Santiago. The Cargo division, meanwhile, accumulates five consecutive months with a capacity projection higher than the pre-pandemic numbers, with an estimate for this month of 116% compared to 2019 data. 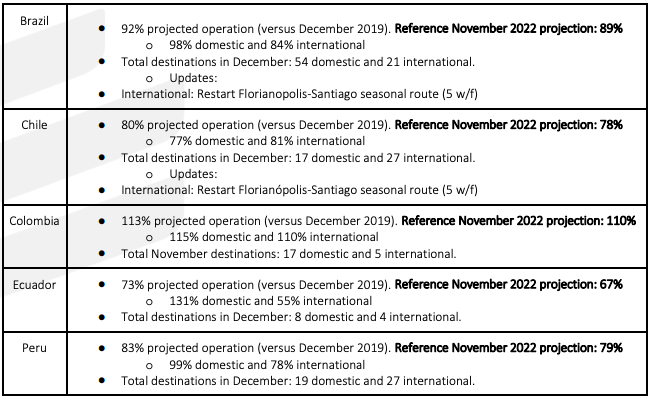