LATAM group projects a passenger operation of up to 70% for April (measured in available seat kilometers – ASK) compared to the same month in 2019 (pre-pandemic scenario), which represents an increase of 2.1 percentage points from March, and the highest figure so far this year.

This month also sees the introduction of operations from Lima (Peru) to Cartagena (Colombia) and Rio de Janeiro/Galeão (Brazil), as well as a route between Quito (Ecuador) and Bogotá (Colombia), expanding the connectivity between countries in the region.

LATAM plans to operate approximately 1,059 daily national and international flights during April, connecting 132 destinations in 20 countries. The group’s cargo business has almost 1,360 cargo freighter flights, with the delivery of a new converted freighter bringing the operating fleet to a total of 13 freighters. These projections are subject to the evolution of the pandemic in the countries where the group operates.

In March 2022, passenger traffic (measured in revenue passenger-kilometers – RPK) was 66,5% in relation to the same period in 2019, based on an operation measured in ASK (available seat kilometers) of 67,9% compared to March 2019. As a result, the load factor decreased 1,7 percentage points, reaching 81,1%.

With regard to cargo operations, the load factor was 60,6%, which corresponds to an increase of 2,6 percentage points compared to March 2019. 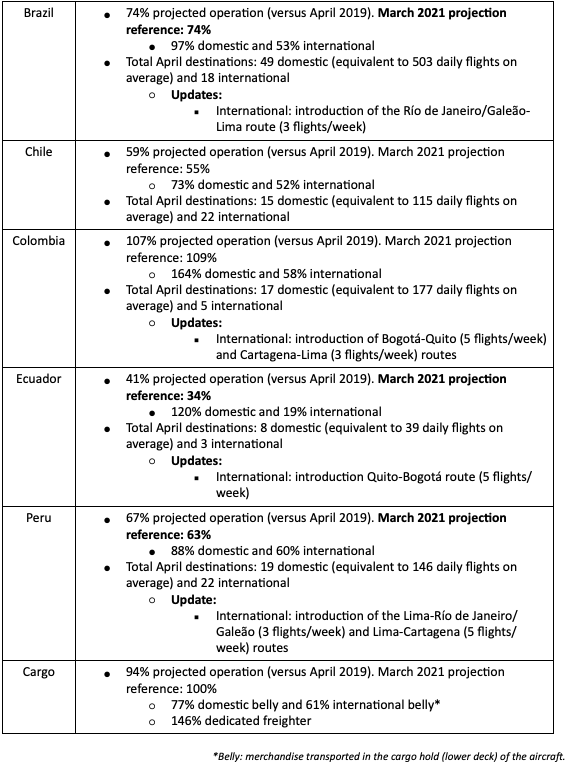