LATAM projects operation of 73% for May, maintaining the recovery trend of recent months

LATAM projects operation of 73% for May, maintaining the recovery trend of recent months

The LATAM group projects a passenger operation of up to 73% for May (measured in available seat kilometers – ASK) compared to the same month in 2019 (pre-pandemic scenario). This would be the fourth consecutive month of a positive operational trend for the group, accompanied by the reactivation of routes and the introduction of new destinations to the global connectivity network.

LATAM plans to operate approximately 1,115 daily domestic and international flights during May, connecting 133 destinations in 20 countries. This month the Brasilia-Sinop route will be introduced in the domestic market of Brazil. The group’s cargo business has scheduled 1,210 flights in cargo freighters. These projections are subject to the evolution of the pandemic in the countries where the group operates.

In April 2022, passenger traffic (measured in revenue passenger-kilometers – RPK) was 69.4% in relation to the same period in 2019, based on an operation of 71.2% compared to April 2019 (measured in ASK – available seat kilometers). As a result, the load factor decreased 2.1 percentage points, reaching 81.2%.

The load factor of cargo operations was 59.3%, which corresponds to an increase of 3.3 percentage points compared to April 2019. 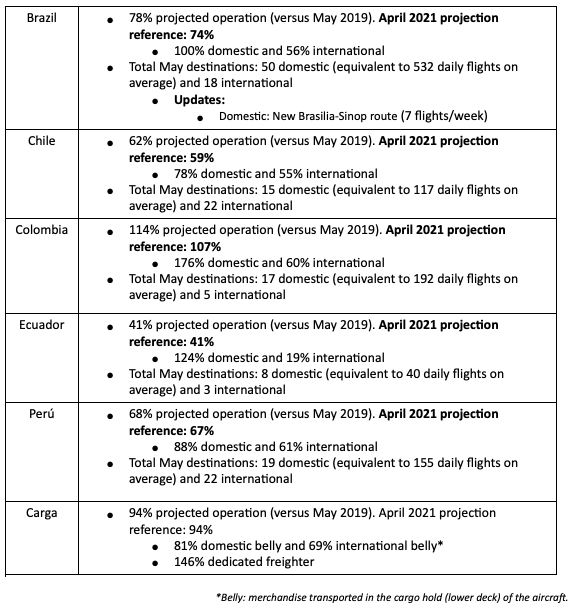