Global passenger traffic declined by -75.1% in July and -69.4% in August compared to the corresponding months in 2019. The improvement in passenger traffic volumes from the depths of the crisis in the spring were mainly fuelled by the beginning of a recovery in some domestic passenger volumes.

Air freight has been less impacted by the adverse effect of the COVID-19 pandemic compared to the passenger market which reflects the crucial role the industry has played in alleviating the effects of the pandemic through the transport of goods, essential medicine, and equipment. The August data showed that the trend continued with global air freight volumes remaining relatively stable, declining by -10.9% in July and -10.7% in August compared to corresponding months in 2019. For the first eight months of 2020, global air freight volumes were down -12.1% compared to 2019 with the global 12-month rolling average recorded at -8.7%, continuing a downward trend.

“Hopes that airports could rely on some form of bounce-back in the Northern Hemisphere summer were dashed as the governments continued to apply unilateral measures to close borders or impose unnecessary quarantine measures,” ACI World Director General Luis Felipe de Oliveira said. “While data collected at the end of summer showed some signs of a slow recovery in domestic markets, mainly in China and Europe, the international passenger segment continues to be, for all intents and purposes, non-existent. Subsequently, however, Europe’s market has contracted again due to quarantine measures applied by some countries.

“New travel restriction, partial lockdowns, and the continued imposition of restrictive quarantine measures are hampering the international passenger markets attempts to recover despite studies showing that the additional health and safety measures introduced by airports and airlines mean the likelihood of COVID-19 transmission during air travel to be infinitesimal.”

“We remain positive about the future but, as the ICAO Council Aviation Recovery Task Force prepares to update its guidance, we reiterate the call for a coordinated and globally-consistent approach to testing to replace the blunt instrument of mandatory quarantine.

“The recovery of air travel is crucial in the wider global economic recovery but, to succeed, it will need passengers to have confidence in the industry’s focus on their health and welfare and be assured that they will not be forced to submit to restrictive quarantine when better alternatives exist.”

ACI collects and analyses data from a significant sample of airports that provide regular reports on monthly passenger and air freight statistics, forming part of the world’s most comprehensive source for airport data.

All regional markets posted improved global passenger traffic in July and August but with regional disparities on the strength of the recovery. Asia-Pacific and Europe recorded the comparatively strongest performance with decline of -64.3% and -67.2% respectively in August compared to the same month in 2019. Early data from September however indicate that the strong performance of Europe will not be sustained in September as it was mainly driven by return from holiday traffic within Europe. The Middle East recorded a decline of -90.3% in August compared to 2019. For August, North America (-70.8%), Latin America-Caribbean (-79.6%) and Africa (-82.5%) continue to post significant declines improving however by more than 10 percentage points compared to June 2020.

International passenger traffic continues to be at a virtual standstill in most regions. Beside the surge in Europe following the end of the holiday season, all other regions recording declines between -86.6% (Africa) and -97.1% (Asia-Pacific) in August compare to the same month in 2019.

Domestic passenger traffic continues to improve in all regions. Signs of recovery could be seen in Europe and Asia-Pacific with August domestic volumes at -36.8% and -46.8% below August 2019. Latin America-Caribbean and Africa remain the most effected regions with a year-over-year decline of -75.0% and -72.5% respectively in August. North America, which showed early signs of recovery of its domestic passenger market, continues to improve but at a slower pace than Europe and Asia-Pacific. In August, North America recorded a decrease of -66.7% year-over-year.

Since the beginning of the COVID-19 outbreak, global air freight volumes have been much less impacted then the passenger volumes and the summer end figures are painting a similar picture. The COVID-19 pandemic reduced air freight volumes by slightly more than a tenth year-over-year in July (-10.9%) and August (-10.7%). In August, the improvement in international air freight was damped by a drop in domestic air freight. 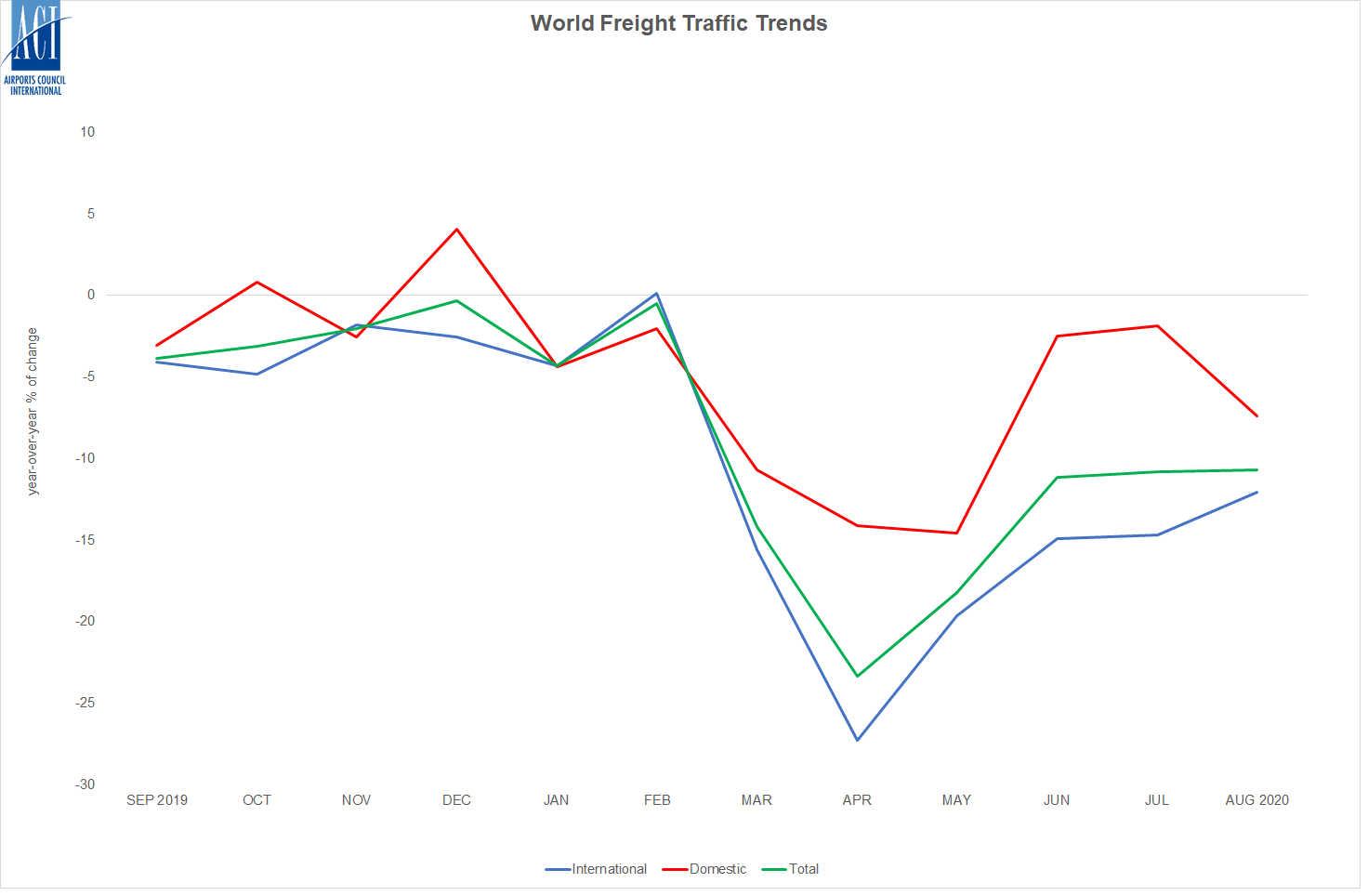