“Our Guests have welcomed us with open arms from day one,” said John Kirby, Vice President of Network Planning for Spirit. “We are very excited to continue growing in Nashville, bringing low fares to more great destinations, both domestically and now internationally”. 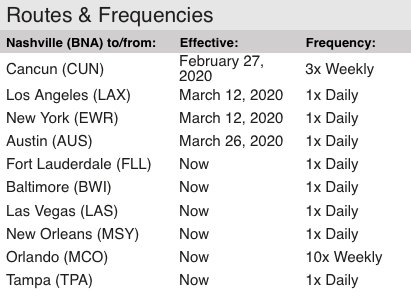 “BNA welcomes this new nonstop service from Spirit, which gives Middle Tennessee and its environs even more opportunities to connect to the world,” said Doug Kreulen, President and CEO of Nashville International Airport. “We send well wishes to all on this inaugural flight and look forward to the many more to come”.

Earlier this month, Spirit announced plans to bring 240 Team Members from its Operational Control Center (OCC) in Miramar to a 49,000-square-foot facility in Williamson County, Tenn. The initial transition should be completed by early 2021, with plans to add nearly 100 more Tennessee-based jobs at the OCC over the next five years.

As Florida’s Hometown Airline, Spirit also recently broke ground on its new $250 million headquarters in Dania Beach, Fla. The new headquarters—which is scheduled to open in 2022—will house 700 of Spirit’s Miramar-based Team Members and will welcome 225 new positions in support of the airline’s growing operations.