The top 10 busiest airports in the world revealed

The top 10 busiest airports in the world revealed

The world airport rankings are based on the preliminary compilation of 2021 global data from airports around the world. Due to ACI’s reach as the trade association of the world’s airports, the rankings reflect the most updated airport data used by the industry and include passenger traffic, cargo volumes, and aircraft movements.

Eight of the top 10 airports for passenger traffic are in the United States with the two remaining in China. All top 10 airports have a significant share of domestic traffic, the traffic segment that has been leading global recovery. The biggest improvement recorded was from Orlando International Airport (MCO, 40.4 million passengers, +86.7%) that jumped from 27th position in 2020 to seventh spot in 2021.

“The ACI World passenger traffic rankings tell the story of an encouraging trend of recovery, with most of the recurrent busiest airports pre-COVID-19 back at the top,” ACI World Director General Luis Felipe de Oliveira said. “Although we are cautious that recovery could face multiple headwinds, the momentum created by reopening plans by countries could lead to an uptick in travel in the second half of 2022.

“As such, ACI World continues to advocate to governments to follow the data and ease travel restrictions to safely restore the movement of people, goods, and services. This will provide travellers with more travel options and propel the overall recovery through aviation’s unique role in boosting trade, tourism, investment and creating jobs.” 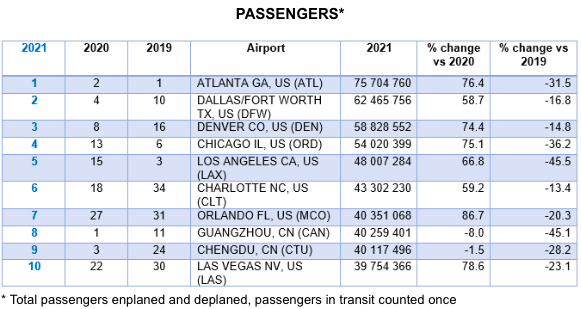 Air cargo volumes at the top 10 airports, representing collectively around 25% (31.5 million metric tonnes) of the global volumes in 2021, gained 12.1% in 2021 year-over-year (or 15.0% vs. 2019 results). The gain can be attributed to the continued increase in demand for online consumer goods and pharmaceutical products.

ACI World estimates that there were over 69 million global aircraft movements in 2021, representing a gain of more than 12% from 2020. The top 10 airports represent close to 8% of global traffic (5.3 million movements) and experienced a gain of 33.9% year-over-year, still representing a drop of 16.1% vis-à-vis 2019. 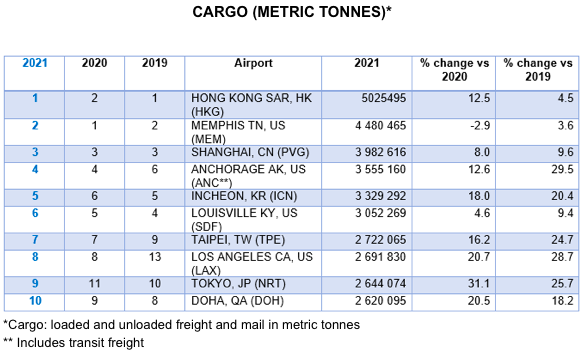 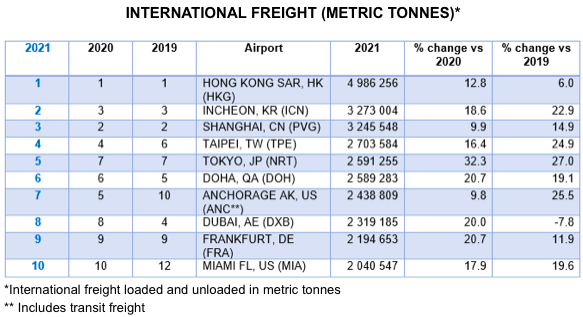 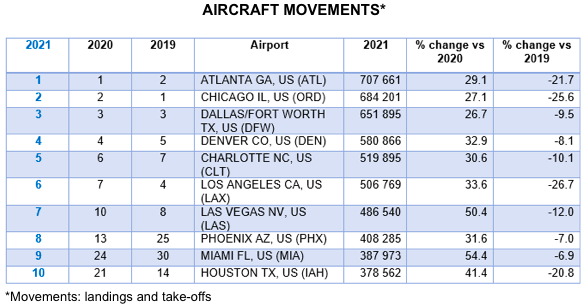