LATAM group projects a passenger operation of 85% for January (measured in available seat kilometers – ASK) compared to the same period in 2019. The group expects to operate approximately 1,409 domestic and international daily flights during the month, connecting 144 destinations in 22 countries. In terms of cargo, the group has more than 1,590 flights scheduled.

At the group level, domestic operation data for January (Brazil, Colombia, Ecuador and Peru) exceeds the levels of the same period in 2019, with the exception of Chile whose recovery has been slower compared to the rest of the markets. In the case of cargo, the positive trend continues and accumulates a sixth consecutive month with a capacity projection above pre-pandemic data.

In December 2022, passenger traffic (measured in revenue passenger-kilometers – RPK) was 80.0% compared to the same period in 2019, based on an operation measured in ASK (available seat-kilometers) of 85.2% compared to December 2019. This implied that the load factor decreased 5.1 percentage points, reaching 78.4%.

In cargo, the load factor was 54.7%, which corresponds to a decrease of 2.6 percentage points compared to December 2019. 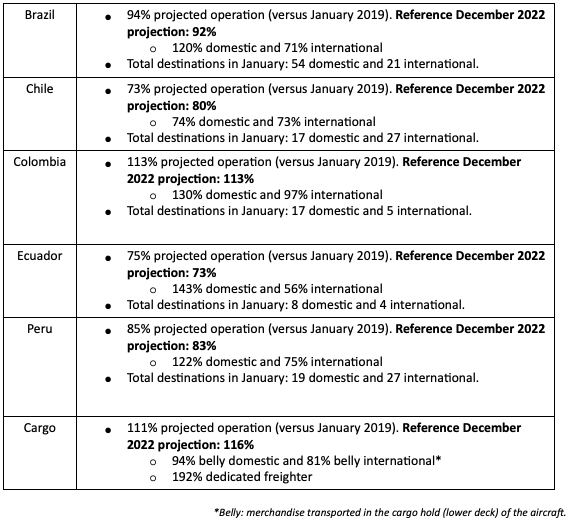